Building upon the IIR filter from the last post we’re now going to improve the edge/peak detection fpga module.

The current algorithm is really simple, maybe too simple: whenever the ADC value is above (resp. below) a hardcoded value, it outputs 1 (resp. 0) with hysteresis.

There are two problems with that:

To understand the second point, some details are needed, more easily illustrated with a captured scope signal (tapping testpoints TP5, which is the raw antenna signal, and TP1, which is the LOPKD signal, on the proxmark3): 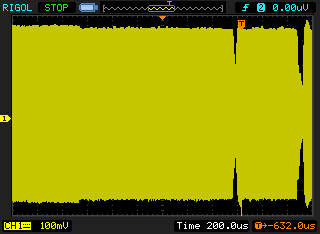 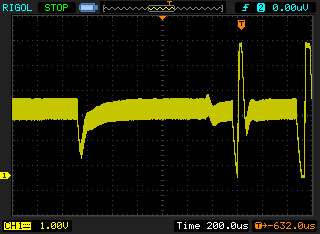 Well, no… The module forgets one point: when the reader wants to communicate with the tag, it does so by briefly shutting down the magnetic field as seen on the images above. So what happens if the field is modulated “low” by the tag and then the reader needs to send a pulse to the tag, shutting down the field briefly? The LOPKD circuit path properly generates two downward peaks: the first one because the tag decreased the field amplitude and the second one because the amplitude decreased again (down to 0).

This means the lo_edge_detect module properly detects the amplitude state being low (0), but is not able to detect the 2nd peak as its output is already 0. This could be an issue if you’re trying to snoop and interpret a reader-tag communication where this event occurs.

After trying to work around that limitation using heuristics for a while and obviously failing, living up to our group name, I came to the conclusion a new algorithm couldn’t be avoided anymore.

Detecting peaks is so common, some great algorithm must certainly already exist… So I thought. Unfortunately, there is one major constraint for our implementation: we want to do real-time processing, since we might need to react to whatever signal we’re currently interpreting (acting as a reader or a tag). This means that, any algorithm working with a buffer to process and detect the peaks, or detecting them with a delay won’t work for us. That discarded pretty much any algorithms I could come across (within my very short attention span, thus if you have a good suggestion let me know).

With that constraint in mind, only improving on the thresholding algorithm still seems possible: after all, all we want is to be able to detect two consecutive peaks going in the same direction. Obviously, the new module can’t just output the peak levels, but needs an output which toggles each time a new peak is detected. For backward compatibility reasons, though, the peak levels are being kept as well.

With my blood sugar level low, here is the patent-pending algorithm I could come up with: toggle the output whenever a high (resp. low) threshold is reached, but only if a ‘near-zero’ zone was reached since the last toggle.

In practice, that means having a high and low threshold as well as a high-zero and low-zero threshold. 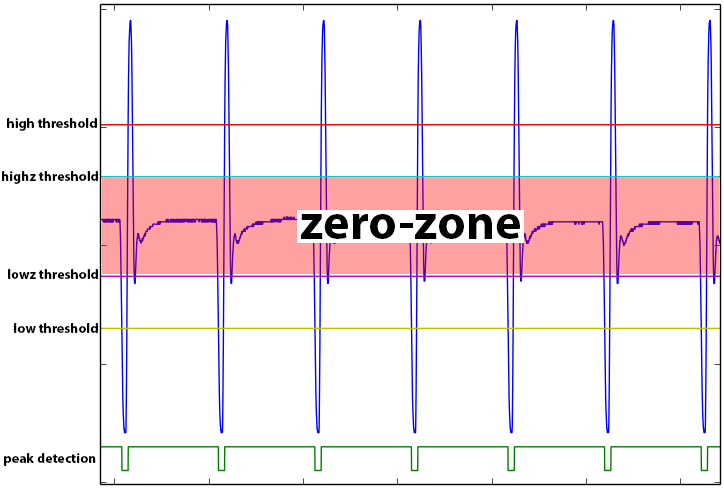 Life looks beautiful and all, except the algorithm went from having two hardcoded thresholds to having 4 of them. Obviously that makes it even more sensitive, and far less robust to different signal amplitudes. Indeed, just moving the antenna is enough to make it fail.

There’s a simple solution to that though: we can auto-tune the threshold values using the maximum and minimum values being reached and some magic rule of thumb formulas.

And that’s almost good to go, but take a look at this example: 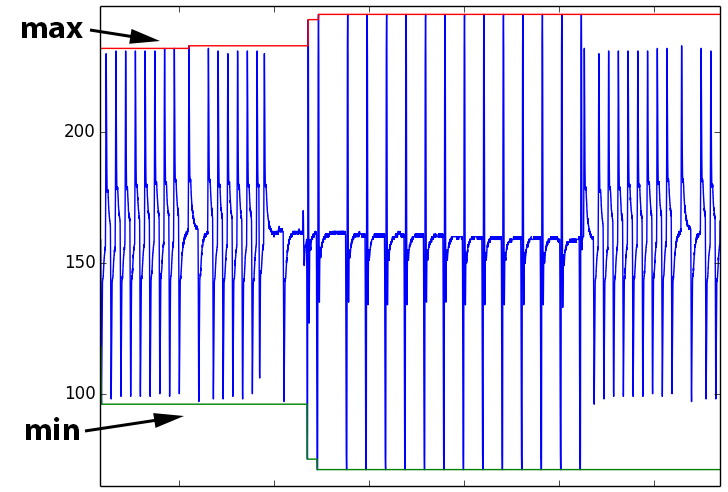 As you can see, we have a burst of higher amplitude peaks in the middle (they are the reader’s pulses, whereas the other ones are the tag’s modulations). Hence, with a naive min max approach, the computed thresholds after this burst could be overly optimistic and miss some smaller peaks (although not in this case insofar as the amplitude difference isn’t too big).

The idea is therefore to come up with some kind of min/max envelope follower which yields the following result: 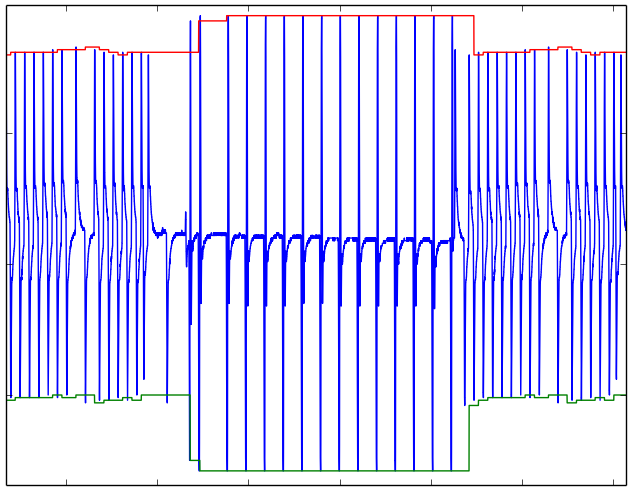 The idea of this algorithm is fairly simple as well: it just tracks the current minimum (resp. maximum) value since the last maximum (resp. minimum) value/peak. In other words, each time the signal has a peak in the opposite direction, the minimum or maximum value is reset. There is just one small heuristic using a threshold to decide whether or not a minimum/maximum value is peak or just a local fluctuation.

For more details about this envelope follower, you can read the following verilog code:

Putting it all together

We now have a peak detector with the following features:

Let’s illustrate this with a final signal, one snooped from a real tag programmer. 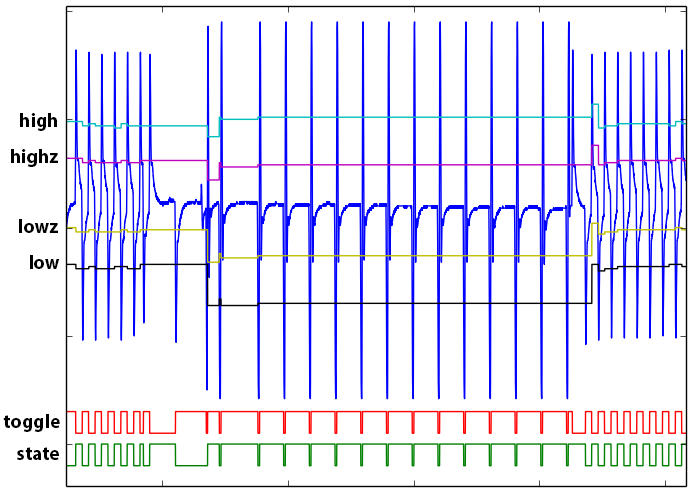 Zooming in, you can see how the two consecutive low peaks are properly detected: 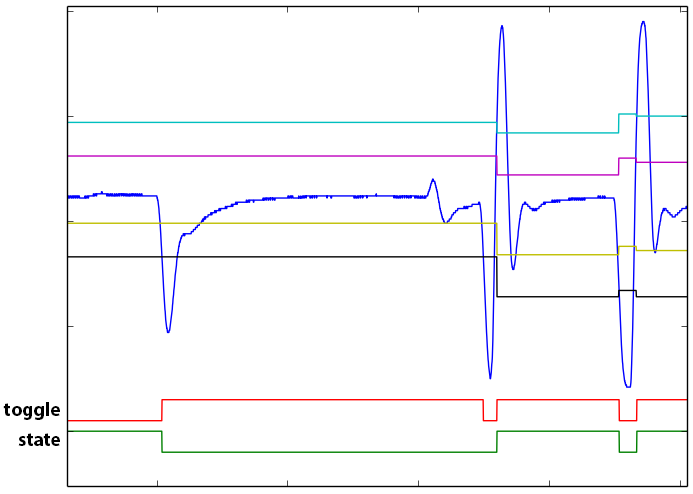 Although not very technical and probably a little bit boring, hopefully this blog post will demystify and encourage people to improve the proxmark3 code, especially the fpga one: adding new DSP features as needed instead of working around and going for the quick and ugly hack :-).

The code has been committed to the proxmark3 repository here, with testbenches and golden tests as well (be nice, and don’t break them? ^^ ).

Finally we have the needed building bricks in place to get our free coffee, so stay tuned for the next post! :-)

As a reference, here are the code for the modules: