At work, they recently replaced the coffee vending machine for a new one. One detail quickly piqued my interest though: you could now ask the front desk for an RFID token, pay your coffee with it instead of regular coins, and also deposit cash into the token at the vending machine.
How does it work? Which RFID IC does it use? Can we play with it? The next few posts will narrate this journey.

As with any other RFID hacking project, using a proxmark3 is a classic. But, while investigating the vending machine’s low frequency (LF) RFID token, the current proxmark3 LF FPGA code quickly showed its limitations and a need for some serious code overhaul.

Although the following code was implemented only after the hack was successful, it makes more sense to present it first. The hack itself will therefore be explained in later posts.

For anyone who worked with the proxmark3, and ever more so for anyone who added features, it’s really hard not to have a love-hate relationship with it.
You love the fact that you have the power to hack almost any RFID you can encounter, but its crude software implementation (and sometimes hardware), to say the least and not to sound too harsh, is bound to drive you nuts. It’s a shame because this severely deters from implementing any new features or improvements unless you’re willing to put some serious energy into it (unless of course you’re into the quick-and-dirty-code-meh-dont-care category). Yeah yeah [/rant] ;-)

There currently are 3 LF FPGA modules in the proxmark3:

While hacking the vending machine’s RFID tag, improvements of, or rewriting some of these modules were necessary:

A need for filtering

The next blog post will dig into the details of rewriting the lo_edge_detect module to overcome those limitations and some others but as described from the forum post, there is one really annoying thing with the current design: the carrier signal is spilling all over the places, making it very hard to implement any kind of robust edge detection.

An image is worth a thousand words: 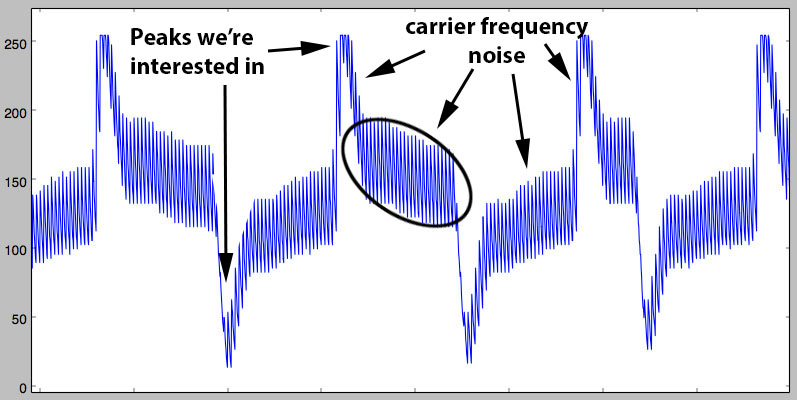 Now, that is some ugly ass signal, isn’t it?!

As you can see, the amplitude of the carrier “noise” is rather large comparing to the peaks, and remembering that the proxmark3’s ADC is only 8bit, you can easily foresee how annoying it is to work with a signal like that.

Indeed, my first rewrite of the lo_edge_detect implementation was very sensitive to the threshold values, preventing from actually using it in the field, for an automatic reader-tag communication decoder, without extensive threshold tuning, which is of course not possible if you don’t want to raise eyebrows. That was worked around, snooping raw ADC values (after some code modifications to the lo_read module) and manually decoding the transactions, yielding to the full pwning of the vending machine, but this monkey work gave a sour taste.

Knowing jack squat about DSP filtering, I got some useful advices from sdjakl, a fellow fail0verflow member: I was told I should look into Butterworth IIR filters, mkfilter and I was provided with a python script to play around and evaluate the response quality of the filter. It’s in situations like this I feel blessed to work with people whose the knowledge sum covers pretty much any field/question, each member having his own very particular set of skills.

IIR filters uses a feedback topology (using multiple input values and multiple past output values) and can use very little memory and resources which makes them a good choice for an FPGA implementation, especially the proxmark3’s tiny one. With mkfilter, given a filter type, the filter’s order (we’ll go with 2), the input sample rate and the cut-off/corner frequency, you get a bunch of information.

The most useful ones for our application being the recurrence relation (what you actually need to implement) and the magnitude vs. frequency graph (to check the actual response of the filter).

On the proxmark3, the main clock is clocked at 24Mhz, the ADC can sample up to 40MS/s hence running at 24Mhz is fine, and the signal we want to filter has useful info up to approx. 40khz and we definitely want to get rid of the carrier noise above 125khz.

Playing around with mkfilter shows that a 20khz corner frequency should give us a nice filter: 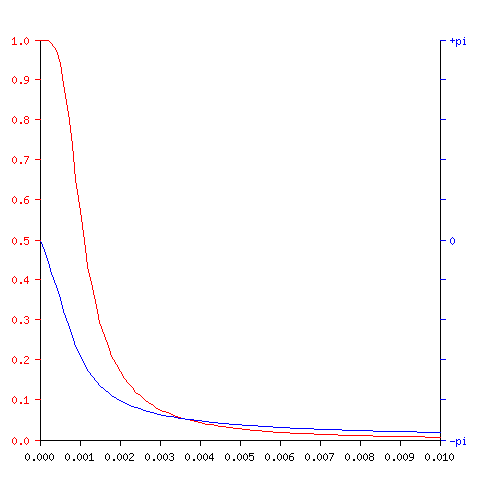 with the following recurrence relation:

x[n] being the input samples and y[n] the output values.

Capturing a real signal using my beloved cheap (but noisy!) Rigol’s DS1052e, and running it through a python implementation of the filter:

we get the following signal:

You should have noticed the use of float numbers in the above implementation. While this is a no brainer for a python version, needless to say the proxmark3’s FPGA would not really like it very much, neither would we if we have to implement floating arithmetics.

The only problem is that it doesn’t work (mainly because b[1] becomes b[0] + 2). Trying to replace b[1] with 0x1ff/0x100 or 0x1fd/0x100 doesn’t work either. After fiddling around for a bit, you quickly come to the conclusion that, in this case, b[0] and b[1] are so close to each other any rational approximation kills the subtle relationship between them. Changing the corner frequency doesn’t seem to make that much difference either. 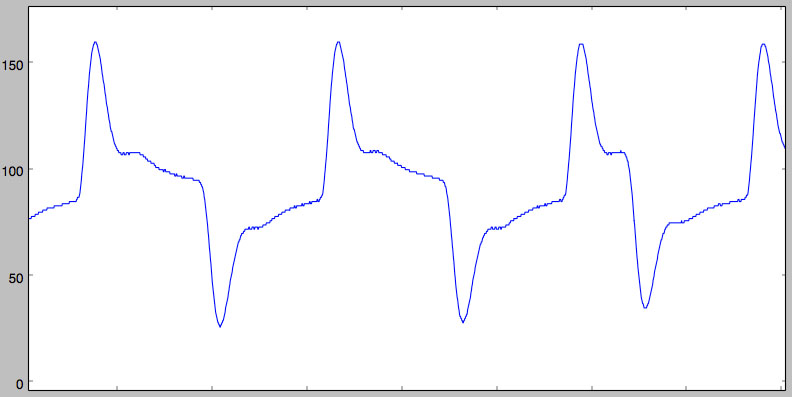 Not quite as pretty, but still much better than the initial signal!

I won’t insult your intelligence explaining how to replace muls with shifts and adds, but I’ll just point out that since we’re always going to divide by 0x100 (i.e. shift 8 bits right, therefore dropping the bottom 8 bits) we can simplify the shifts and adds to compute the final 8 bits shift on the fly.

The only thing left is the actual HDL implementation which is quite straightforward with verilog. You’ll find it at the end of this post with its testbench as well, or in the proxmark3’s repository.

But of course, it’s never that simple, Murphy always makes sure of that.
With that many 17bit adders and a tiny-ass fpga such as the one used for the proxmark3 (only 864 LUTs!), the new code exhausted the resources. After a few days, the love turning to hate, and tired of making the code fugly for area optimization, it was time for Plan B: the HF and LF fpga code have been split into two bitstreams and the proxmark3 is now reconfiguring the fpga on the fly when executing commands. That code was committed yesterday, and you’ll need to update your bootrom as well for this change (since the osimage’s address entrypoint had to be changed to make room for the two FPGA bitstreams).

Before moving to the actual vending machine hack, and building from this IIR filter, the next blog post will cover a new lo_edge_detect implementation providing necessary features for the hack.

Hopefully you found this post useful, and if you have any questions or comments, well, just use the comment box :-)

with the following testbench: