This challenge was about establishing a connection to a hidden tor service which is rather picky in accepting connections. We were given the following description:

The first thing we did was of course trying to connect to the service. Whether using a tor to web gateway as for example onion.to or a local tor instance, the result was the same: no connection could be established. Using curl -v –socks5-hostname localhost:9050 http://6c4dm56aer6xn2h2.onion/ showed that curl didn’t even send the request, confirming that the problem is at the tor layer and not at the HTTP layer. Thus getting a tor connection to the hidden service is actually part of the challenge.

So next, we tried to make sense of the information provided:

As no one on the team knew about the specifics of the tor protocol some googling was necessary. This led us to the website describing the hidden service connection setup. The setup can be summarized in 3 steps:

The relay list provided by vidalia, a graphical user interface for tor, listed a node called “chandler”, so we assumed this node is supposed to be the RP. We can get more information about that node at its tor network status page. 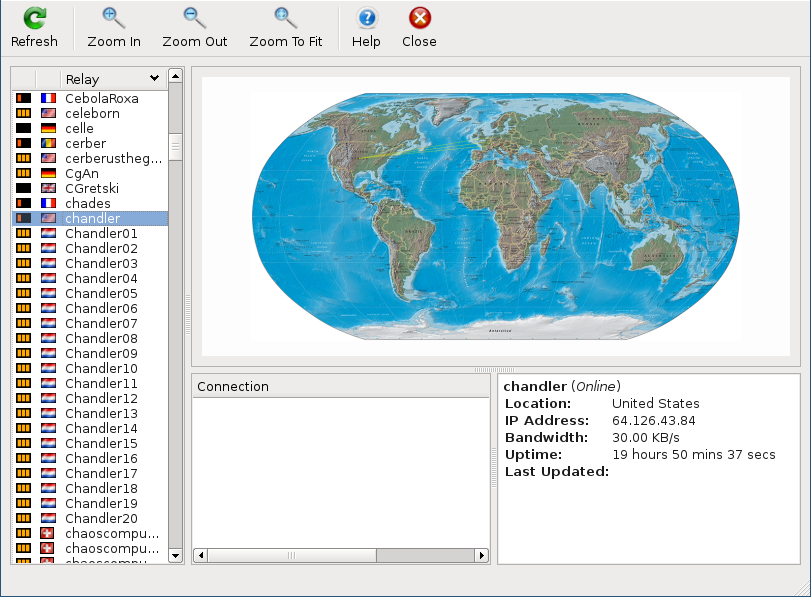 We also found the word cookie mentioned in the context of hidden services in the tor man page:

Missing, though, was any option to specify a specific rendezvous point. Also the description of the HidServAuth option didn’t indicate any relation to a one-time secret. The next points to figure out thus were:

At this point we started looking at the tor source code. The code that handles the client side for hidden services is mostly contained in or/rendclient.c. It is written in an asynchronous style where a lot of the functions are called implicitly from other parts of the code base. This makes it difficult to understand the exact execution flow by just skimming over the code. Luckily the source file in question contains enough comments and expressive identifier names to find the relevant parts.

The presence of REND_COOKIE_LEN and REND_DESC_COOKIE_LEN confirms that there are two separate types of cookies. The first one, called rendezvous cookie, is generated randomly in rend_client_send_establish_rendezvous. The other one, called descriptor cookie, is the one specified in the tor configuration and is parsed in rend_parse_service_authorization. The descriptor cookie is already used when querying database nodes (the very first step), which is done in rend_client_refetch_v2_renddesc. Running tor with Log info stdout and SafeLogging 0 in the configuration produces the following messages:

It seems that this can only happen when the descriptor cookie (or the lack of one) is correct. The random rendezvous cookie can be changed to a repetition of the two byte sequence BEEF by replacing

in the function rend_client_send_establish_rendezvous with this code:

The Rocky Road to Chandler

The cookie alone doesn’t get us anywhere though; we need to get “chandler” as rendezvous point. We don’t even know whether we got the cookie part right or not, as we cannot test it yet. The way a rendezvous point is chosen seems to be quite complicated. Tor tries to reuse existing circuit endpoints, can extend existing circuits, uses node selection routines used at other places and so on. This means there are many places that can be patched to hardcode “chandler” as rendezvous point. As it happens though, the code is quite fragile in that respect. We made several attempts that resulted in tor not bootstrapping anymore or otherwise hanging. To avoid this we searched for a less fragile place to patch instead of just overwriting whatever node was chosen with chandler.

We were finally successful when we patched compute_weighted_bandwidths in or/routerlist.c. This function is used to rank candidates router nodes, possibly all over the place, not only for a rendezvous. What is nice about this function is, that it gets a list of all routers and just assigns a number for each. All pre- or postconditions and other implicit stuff is handled elsewhere. The patch simply compares the fingerprint of the ranked node with the one of “chandler” and in the case of match assigns a very high weight and bandwidth:

When starting tor with this patch, we can see several circuits with “chandler” as last hop in the log:

If the assumptions we made are correct, it should reuse those as rendezvous point. Let’s try again:

And we are done.